The Value of Water Exhibition 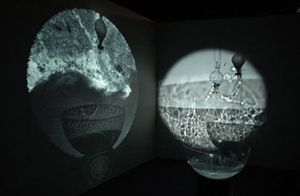 The Value of Water Exhibition

The Value of Water

By The Reverend Canon Tom Miller

excerpt from Water Matters: Why We Need to Act Now to Save our Most Critical Resource

The exhibition, the largest to ever appear at the Cathedral, will feature the work of 41 contemporary visual artists, including Mark Rothko, Jenny Holzer, Wiliam Kentridge, Kiki Smith, Bill Viola, Pat Steir, Gregory Amenoff, and others whose work focuses on depicting and reflecting on water.

The 18th century philosopher Novalis wrote, “Our bodies are molded rivers.” Such poetic sentiment is easy to appreciate even in the less-than-poetic age in which we live. We are generally aware of our bodies as organic compositions attuned to the dynamics of nature. It is more difficult, perhaps, to think of buildings as organic bodies in quite the same way. Imagine, for instance, streams of water coursing through the seemingly solid stones of The Cathedral of St. John the Divine in New York; water rising up through the pillars like sap in a soaring forest.

Outside, the Gothic-styled Cathedral seems impressively massive, built to withstand the tempering of time. Inside, the breathtaking view from the Bronze Doors to the far end of the building presents an even more compelling vision: stone, wood and glass, all hard materials of the Earth that have been molded into an architectural body of wondrous dimension. So, where’s the water, that element that makes it a living cathedral rather than just a pile of stones?

The simple answer is that there’s water, water everywhere, as the imagination might fashion it, since none of the stone, wood or glass would exist without the presence and power of water over geological time. As biblical tradition has it, human beings bear the image of their Creator. Perhaps in like manner, all the materials in the Cathedral bear the mark of water, that first element of Creation from which all things were made.

Another simple answer is that water is at the very foundation of the Cathedral. The land on which it stands is dotted with wells, springs, and underground streams. For decades water for the Baptismal Font was drawn from one of them. So, even while we think of the building as the solid monumental body it surely is, we can also envision the water-laced land from which it rises.

Shortly there will be yet another answer to the question, “ Where’s the water in the Cathedral?” “The Value of Water,” an ambitious installation of art opens in September, 2011. Works by painters, sculptors, and media artists, including the seven presented in the following pages, will be installed in bays of the nave, in various chapels, and along the walls of the Great Crossing. As interpreters of the unseen, artists will help us to see what has been there all along; to strengthen our awareness of water, and to prompt our imaginations in the contemplation of water, from wells and underground springs to surging seas and mighty rivers. With this collection of powerful presentations, there really will be water, water everywhere.