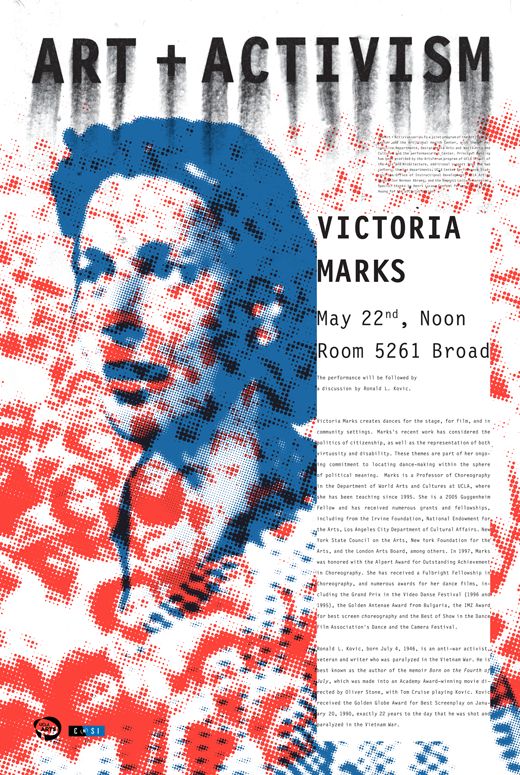 Victoria Marks creates dances for the stage, for film, and in community settings. Marks’ recent work has considered the politics of citizenship, as well as the representation of both virtuosity an disability. These themes are part of her ongoing commitment to locating dance-making within the sphere of political meaning. Marks is a Professor of Choreography in the Department of World Arts and Cultures at UCLA, here she has been teaching since 1995. She is a 2005 Buggenheim Fellow and has received numerous grants and fellowships, including from the Irvine Foundation, National Endowment for the Arts, Los Angeles City Department of Cultural Affairs, New York State Council on the Arts, New York Foundation for the Arts, and the London Arts Board, among others.
The performance was followed by a discussion by Ronald L. Kovic.
Ronald L. Kovic, born July 4, 1940, is an anti-war activist veteran and writer who was paralyzed in the Vietnam War. He is best known as the author of the memoir “Born on the Fourth of July,” which was made into an Academy Award-winning movie directed by Oliver Stone, with Tom Cruise playing Kovic. Kovic received the Golden Globe Award for Best Screenplay on January 20, 1990, exactly 22 years to the day that he was shot and paralyzed in the Vietnam War.