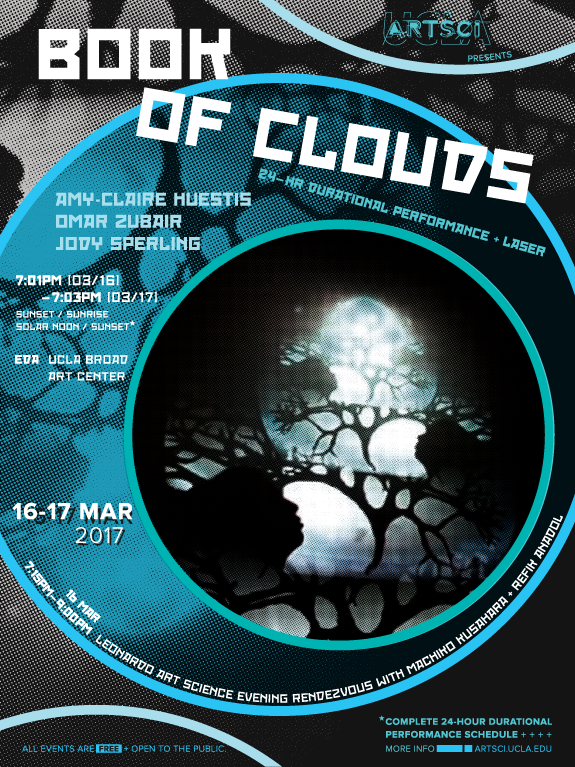 Book of Clouds is a 24-hour durational performance on the Spring Equinox in Los Angeles—equal hours of light and dark. The March 16th performance will be followed by a Leonardo Art Science Evening Rendezvous (LASER) featuring Machiko Kusahara and Refik Anadol.

Please join us at your own pace in this day-long performance-installation and premiere location of Book of Clouds. Three artists from New York City, Vancouver, BC and parts unknown come
together using inventive light technologies, movement, and sonic composition to playfully sync to sky rhythms of sun, moon, human, cloud, bird, storm. Book of Clouds inhabits other systems of
time, and plays alongside the mathematical system of the clock. The piece workshops a time outside the clock-rhythm of a faster disorienting world -- what geographers such as David Harvey
or Doreen Massey have labeled space/time compression, the process whereby capitalist technological innovations and economic production cycles have made people work faster and do more with less time as they cover more space. But what happens when we enter the space/time of a cloud?

The development of Book of Clouds is rooted in ritual experiential practices that involve keen listening and prolonged investigation of nature. On March 17 in Los Angeles, the sun rises at 7:02
am and sets at 7:02 pm -- an interval of exactly 12 hours. The gallery is open from 7:02 am until 7:02 pm. A schedule of events will be posted.

Book of Clouds tells a story of the sky above many cities. Each placing of the piece involves listening and creation in that particular locale -- it is premiered at UCLA Art/Sci and next forms in
New York City at the Barychnikov Arts Center.

The UCLA Art|Sci performance is follows a LASER (Leonardo Art Science​ Evening Rendezvous​) with talks by each of the artists on March 16, 2017 @ 7 pm.

Amy-Claire Huestis makes a space to encounter the mysterious and to suspend a state of wonder in her interdisciplinary practice of expanded painting, light, and experimental media. Her installations, performances, books, paintings and drawings speak to a broadened conception of time, involving visual processes of storytelling, slowness, synchronicity, and durational exercises and actions. One of her unique projects is the invention of her own medium of painted light projection, for this she re-designs the historic optical device of the magic lantern using current technologies. Stemming from her experiential practices in the supernatural environment of British Columbia, her present pieces tell the soulful story of rhythms and patterns in nature and common mind.

Jody Sperling is the Artistic Director of Time Lapse Dance. She has created 40+ dance works and toured to 11 countries. In 2014, Sperling participated in a polar science mission to the Arctic--as artist-in-residence aboard an icebreaker--where she danced on sea ice and made the short film “Ice Floe” (Creative Climate Award winner). Since then, she developed the program Bringing the Arctic Home which transports the icescape to the stage. Sperling is the world’s leading expert in the dance style of Loïe Fuller (1862-1928) and was choreographer, creative consultant, and dance coach for the French feature film and Fuller biopic “La Danseuse” (2016 Cannes Film Festival).

Omar Zubair — utilizing skills developed and continually honed through art practice, scientific experimentation, and trans-ethnographic participation—has been focusing on expanding the scope of reality by creating a process of bringing back artifacts from the dream place, catalysing the growth of new sensory organs via confocal synaesthetics, and more. He has created sound for the Wooster Group, Lady Gaga, French perfume commercials, movie trailers, spiritual gatherings...and has been traveling the country for developing a new national anthem.

Omar Zubair and Amy-Claire Huestis have collaborated since 2012 in a unique and playful practice that incorporates live painted light manipulation, sonic composition, and movement (of people and screens) in installation and performance. We work toward active wonderment as a catalyst for turning traditional and non-traditional gallery and performance places into creative emergence spaces (rather than as spaces for display, or post-production spaces), bringing the play and surprise of the studio into the gallery space. In 2015 we began collaboration with choreographer Jody