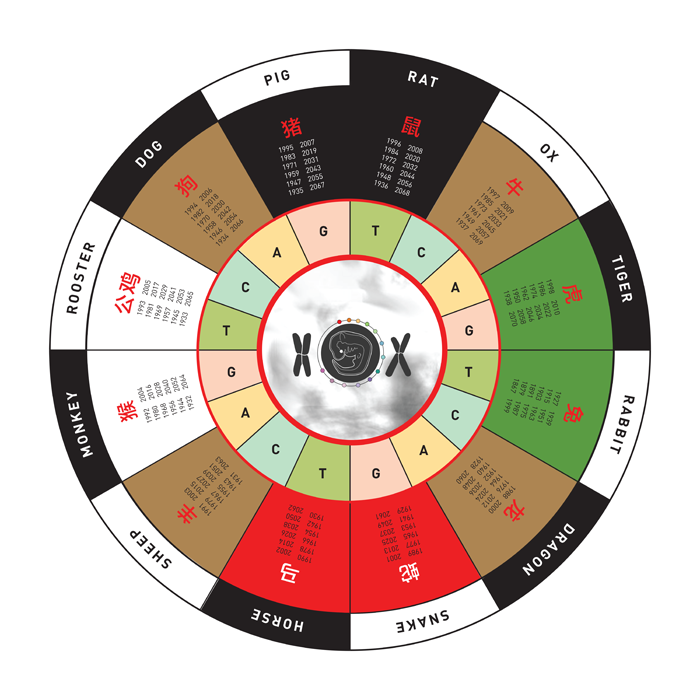 When we look around us both as humans and as a species in a multi-organismal world, we tend to focus on our differences. However, underneath all of us are a set of genes called HOX genes that define the basic body plan of all animals – that makes you have a head, two hands and feet, a long body like a snake or a tail like a monkey. These genes are the same in all of us and have been conserved across evolution.

HOX ZODIAC is a collaborative project between an artist and neuroscientist since 2008. Based on the Chinese animal zodiac and the Hox gene, it has evolved into a “dinner” that addresses through experience and dialogue our deep relationship with animals as companions, food and lab experiments. The artist and scientist seek to bring into the public this relationship in a way that expands the idea of the zodiac and puts the humans into the role of an animal that they have been assigned culturally. The project brings up issues of GMO and food in a very personal way and also points to the growing influence of Chinese culture in the West.

Food shapes our cultures, individual bodies and even genes within us. Research has found that environmental factors such as food availability, nutrients and diet can turn or off genes, thereby affecting us for generations to come. With this project, the art sci team create a performative exhibition that brings together people to a dinner table to taste, smell and talk about food, its sources, how it affects the body, our relation to animals and plants and our genes.

HOX ZODIAC project has evolved into a dinner table with humans sitting as animals of the Chinese zodiac as a representation of the myriad of shapes that Hox genes can produce. Herbs and foods associated with each animal, which also cure ailments of specific organs, will be presented to the guests. Dinners served are based on food associated with each zodiac animal based on Chinese and Western medicine and Ayurveda and recipes keep evolving. To date, dinners were hosted in Los Angeles, Hong Kong, Taiwan, New York, Vienna, Linz, Tsukuba, the Museum of Natural History in Tacoma and most recently at the UCLA Fowler museum.

The reception will be a tasting event that all are invited to, and during the duration of the exhibition, there will be private and pop up dinners in which the audience performs. Participants will don lab coats and bring their food offerings signifying them as the resident expert/scientist – which we all were with regards to food before it became an industrial commodity. Guests will also be encouraged to share menu ideas based on the ingredients associated with each animal, which will serve as another way to share ideas over food.

Conversations, stories, recipes and ideas that emerge become integrated into the project as it keeps evolving. The exhibition will include many collaborative artifacts and an artsci (cook)book about the project.