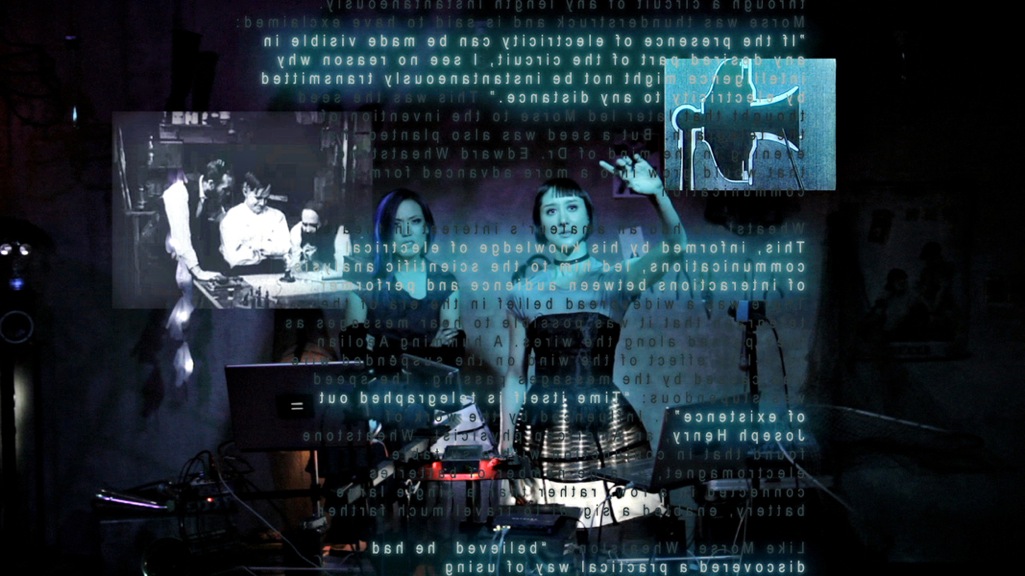 TAYLOR AUBRY received her Bachelor of Science degree from McGill University in Montreal, Canada. After that, she moved to sunny Los Angeles, California to research new solar cell technologies. She is currently a second year PhD student in Ben Schwartz’s lab at UCLA in the materials division. Her work focuses on improving the performance of polymer solar cells by seeking to understand the fundamental physics and property-structure relationships within these devices.

CLARISSE BARDIOT is a speaker, consultant, art director or editor in various institutions and cultural events. A PhD on Virtual Theatres , she is an associate researcher at CNRS and professor at the University of Valenciennes (laboratory Devisu). She obtained in 2005 the stock market researcher resident of the Daniel Langlois Foundation in Montreal for research on 9 Evenings, Theatre & Engineering . It contributes to international project DOCAM (Daniel Langlois Foundation - Montreal) on documentation and archiving works of art with a technological component. From 2009 to 2010, as Deputy Director of manège.mons / CCDS (Belgium), coordinates two European projects (CECN2 and Transdigital), led many projects of training and artist residencies around the arts and technologies and is the editor of the journal Patch , which creates the editorial. In 2010 she founded with Annick Bureaud Cyril Thomas and Jean-Luc Soret platform Nunc . In 2011, she created Substrate , a publishing house dedicated to contemporary creation in the form of printed and electronic publications, and in 2013 opened a gallery in Brussels. Her publications include arts and digital technologies: digital performance , Collection Basic, Leonardo / Olats June 2013; 9 Evenings, Theatre & Engineering , website of the Daniel Langlois Foundation, May 2006. It is currently developing Rekall , an open-source environment to document, analyze the creative process and simplify the recovery works.Curator, Editor, University of Valenciennes (FR). http://www.clarissebardiot.info/

LAURA CHECHANOWICZ is a PhD student in Media Arts and practice at USC. She is a mixed media artist dedicated to sound and production design, among other interests. Her training includes experience in the Los Angeles film industry and higher level education. She received her BA with honors from the University of Michigan with majors in Film & Video, Psychology and German; her MA in Film Studies from the University of Iowa; her MFA in Animation from the University of Southern California; and she began her PhD in Media Arts and Practice at USC this fall, where she worked as the Sound Lead for the Advanced Game Project Miralab this past year. As a sound designer, Laura is committed to crafting rich environments and creating emotional experiences through experimental and musical sound design. She is highly influenced not only by media and history, but also by neuroscience and psychology. http://worldbuilding.usc.edu/people/bio/laura-cechanowicz/

ERKKI HUHTAMO is a UCLA professor between the Departments of Design Media Arts, and Film, Television, and Digital Media. He holds a PhD in Cultural History from the University of Turku, Finland. He is a media archaeologist, author, and exhibition curator. At DMA his areas are the history and theory of media culture and media arts. He is internationally known as a pioneer of an emerging approach to media studies called media archaeology. It excavates forgotten, neglected and suppressed media-cultural phenomena, helping us to penetrate beyond canonized "grand narratives" of media culture. http://www.erkkihuhtamo.com/

MARCO PINTER creates artwork and performances which fuse physical kinetic form with live visualizations. He has a PhD in Media Arts and Technology from the University of California, Santa Barbara, and an undergraduate degree from Cornell University. His work integrating graphics with robotic sculpture is supported by grants from the Interdisciplinary Humanities Center, the Santa Barbara Arts Collaborative, and the UC Institute for Research in the Arts. He has exhibited artwork and performances at cities around the world, including Dubai, New York, Montreal, Tehran, Hong Kong, Anaheim, San Diego and Santa Barbara. Wired magazine’s online UK site published a feature on Pinter’s work that explores perception through kinetic sculpture and graphics. Pinter is a contributing author to The McGraw Hill Multimedia Handbook and The Ultimate Multimedia Handbook. He is an inventor on over 70 patents, issued and pending, in the areas of live video technology, robotics, interactivity and telepresence. http://www.marcopinter.com/

SHANNON WILLIS is a multi-disciplinary artist residing in Santa Barbara California. From very early on, her artistic family fostered her visual imagination by immersing her in a creative environment. Her work continues to evolve and push boundaries. Currently she is finishing her Masters of Fine Art at University of California Santa Barbara. She shows her expansive multi-media installations and artwork internationally, recently exhibiting a video installation during International Digital Arts Week in Paris France. Shannon's work explores the exchange between philosophy, quantum physics, spirituality, and emotions. Working with video, tactile sculptural objects, projection, and viewer interaction, as the tangible results of those converging ideas. The art work becomes an event. She creates the objects and the script, providing spaces for the viewers to become engaged, entertained, and entangled in the phenomena of being alive. http://www.artbyshannonwillis.com