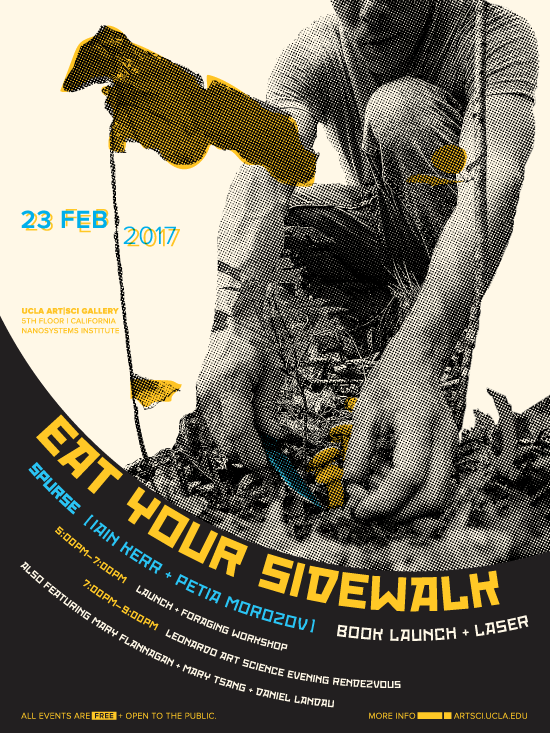 Eat Your Sidewalk is a ground-breaking, category-defying foraging cookbook!
"It is a manifesto and a call to action. We want to inspire you to find wonder and ecological possibilities directly underfoot. We want to launch a sidewalk-to-table revolution that changes our cities and gives us a new sense of community and place." —SPURSE

Read more about the book and the foraging process here.

Ian Kerr is a founder and principal at the design firm SPURSE, and the Director of Creative Practices at the Feliciano Center for Entrepreneurship at Montclair State University. He is a cross disciplinary designer, systems thinker, artist, and writer working at the intersection of paradigmatic creativity, ecology, emergent systems, design for change, process philosophy, and experimental forms of making (everything from tools, to food, cosmologies, apps, clothing, architecture, educational programs and landscape design). At the heart of his work is helping groups apply novel practices of creativity to transform seemingly intractable problems into problems worth having. He has spent the last two decades developing and teaching unique transformative models of creative processes. At the heart of this boundary blurring practice is his work within the design consultancy SPURSE who has been at the forefront of ecological research, experimental design, and innovation leadership for the last fifteen years. While developing ground breaking ways to probe, catalyze, disrupt and re-imagine systems both large and small they have collaborated with communities, organizations, and individuals from the high arctic to the inner cities in Bolivia (via projects ranging from restaurants, to wetlands, to wayfinding apps, to urban renewal programs, to micro-biology laboratories and white papers) to effect real change.

Petia Morozov has been practicing across such diverse fields as ecology, urban design and systems theory for 20 years, advancing the potential of each project by building strategies for implementation. Before founding MADLAB, she trained for many years with Kiss + Cathcart Architects and Pentagram in New York City, working on technologically innovative projects in the US, Europe and Asia, including Ijsselstein Solar rowhouses, New Museum of Contemporary Art expansion (1997) and PV Product Research for NYSERDA (9 MB). Her work in collaboration has been exhibited at Cooper-Hewitt National Design Museum (1999) and Building Museum(2003), and her writing has been featured in various publications, including Architectural Design, Yale Constructs, Journal of Architectural Education, Wiley Press, Performance Art and a number of ACSA proceedings.

Mary Tsang is an artist-biologist exploring the biopolitical nature of new biotechnologies, their roots in society and transhumanism, and the question of who gets emancipatory access. Since 2013 she has partnered with a filmmaker to produce a documentary web-series on “bio-art” and emerging communities in DIYBio. The web-series DIYSECT hopes to initiate conversations on the rapid effect of biotechnologies on our society. Her most recent work involves gender-hacking, estrogen synthesis/mutagenesis, and promises of "significant otherness." Maggic has participated in a number of interdisciplinary residencies including HackteriaLab2014 in Yogyakarta, Indonesia, Ars Bioarctica Residency in Finland, Bio-Commons Lab @ Rural Hub Italy, and Interactivos?'16: Possible Worlds in Madrid. She holds a Bachelor of Science and Art (BSA) in Biological Sciences and Art from Carnegie Mellon University and is currently pursuing her masters in Media Arts and Sciences at MIT Media Lab, Design Fiction research group. http://maggic.ooo/

Flanagan’s approach to games and technological systems occupy both onscreen space as well as physical spaces and actions, moving away from the screen to push reflection regarding familiar relationships to play, politics, and the personal. Flanagan teaches at Dartmouth College and leads the Tiltfactor game research laboratory and is the founder of the publishing company Resonym. She is based in New Hampshire and New York City.