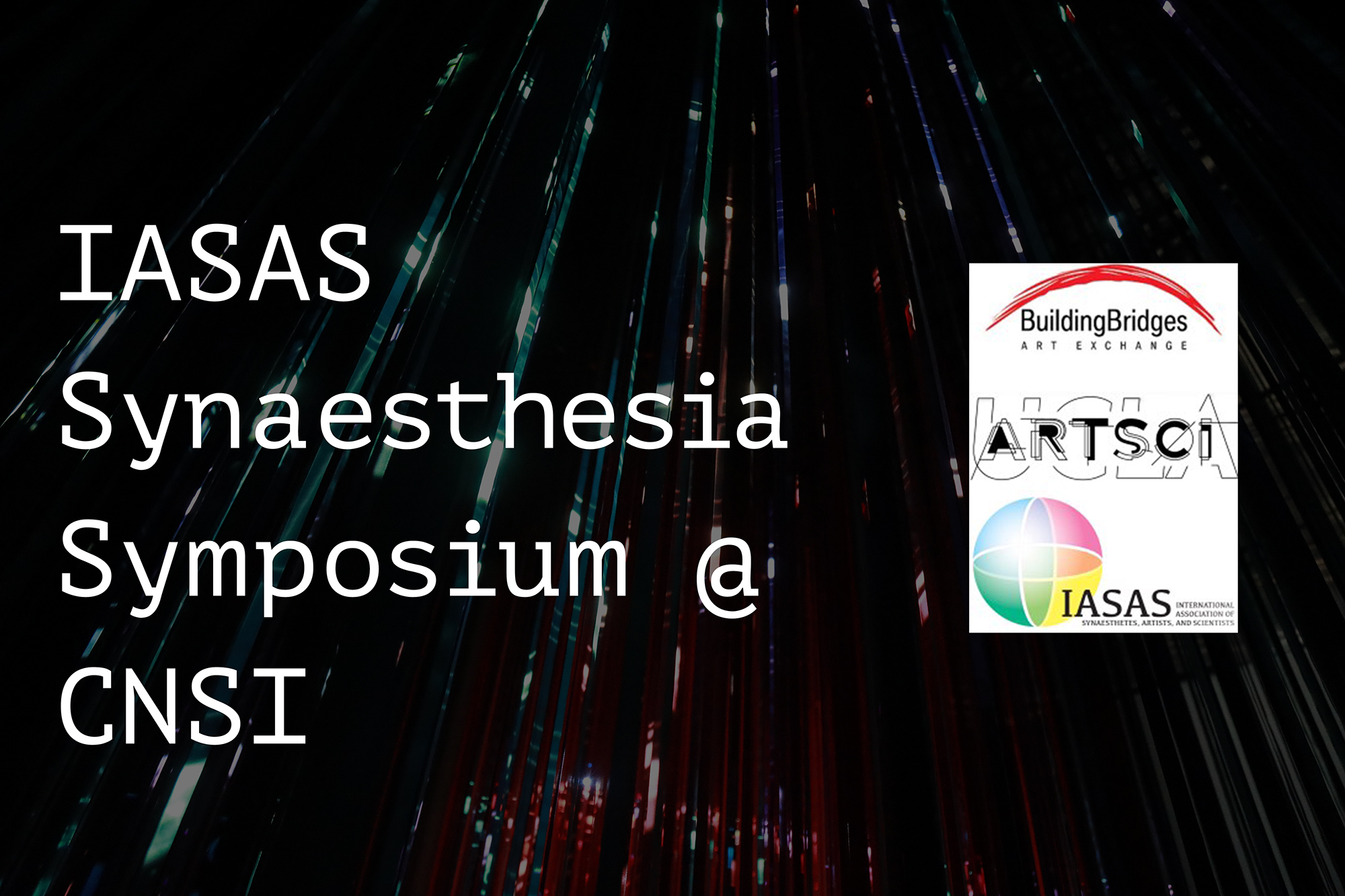 The International Association of Synaesthetes, Artists, and Scientists will host its first ever synaesthesia symposium at UCLA in conjunction with the Art|Sci Center, and in collaboration with Building Bridges Art Exchange. The full schedule of events may be found below:

Thursday, October 19th, 2017, 6pm: Reception, reading and book signing with Dr. Joel Salinas, author of Mirror-Touch: Notes from a doctor who can feel your pain

Joel Salinas was born in Miami Beach, Florida. After studying the intersection of biology and sociology at Cornell University, he completed his medical degree at the University of Miami Miller School of Medicine followed by neurology residency at the Massachusetts General Hospital and the Brigham and Women’s Hospital. He subsequently completed a combined research and clinical fellowship in Behavioral Neurology and Neuropsychiatry at Massachusetts General Hospital, one of the top medical facilities in the United States.

Dr. Salinas lives in Cambridge, Massachusetts, and is an Instructor of Neurology at Harvard Medical School and Massachusetts General Hospital. He specializes in brain health, including neuropsychiatry and cognitive behavioral neurology, and conducts research in social and behavioral epidemiology to understand the complex neurobiological interplay between social relationships and brain health. He chronicles his experiences as a doctor living with synesthesia in his new book, Mirror Touch: Notes from a Doctor Who Can Feel Your Pain (from HarperOne, an imprint of HarperCollins).

Michael Banissy, PhD is an award-winning Cognitive Neuroscientist. In 2016, Michael was awarded the British Psychological Society Spearman Medal, and in 2017 the Bertelson Award for outstanding contributions to psychological research. After completing his PhD at Institute of Cognitive Neuroscience, University College London, Michael took a post at Goldsmiths College (University of London) and is now Director of Research in the Department of Psychology. He has contributed to several diverse research areas. In particular, Michael’s research and areas of expertise focus on synaesthesia, social perception (e.g. emotion perception), social interaction, and creativity and performance. The breadth of his work is not only seen in scientific contributions, but also in his engagement to bring science to the public and his effort in connecting science to art. This has resulted in him receiving a number of honours, including substantial external funding and prizes from major scientific bodies in the UK and internationally.

Richard Cytowic, M.D., M.F.A. is best known for returning synesthesia to mainstream science, winning the Montaigne Medal, with David Eagleman, for Wednesday is Indigo Blue, a book Oliver Sacks called “a unique and indispensable guide for anyone interested in how we perceive the world.” A subject of BBC documentaries, Dr. Cytowic has spoken at the Library of Congress, the Smithsonian, and cultural institutions worldwide. A Professor of Neurology at George Washington University, he is also a Fellow of the DC Commission of Arts and Humanities, and a multiple-times Fellow of The Hambidge Center, the Southampton Writers Conference, and the Virginia Center for Creative Arts. This Spring, Chocolate Smells Pink and Sparkly: Sensory Fusion on the Synesthesia Spectrum will be published as part of MIT Press’s Essential Knowledge series.

An Update on Synaesthesia and the Arts in China
Ninghui Xiong, Abstract Artist and Founder of XNH Painting Music Synesthesia Art Studio

The Colorful Calculator: Reducing the Mismatch Between the Veridical Inducer and the  Non-veridical Concurrent
Joshua Berger  (Sydney Medical School)