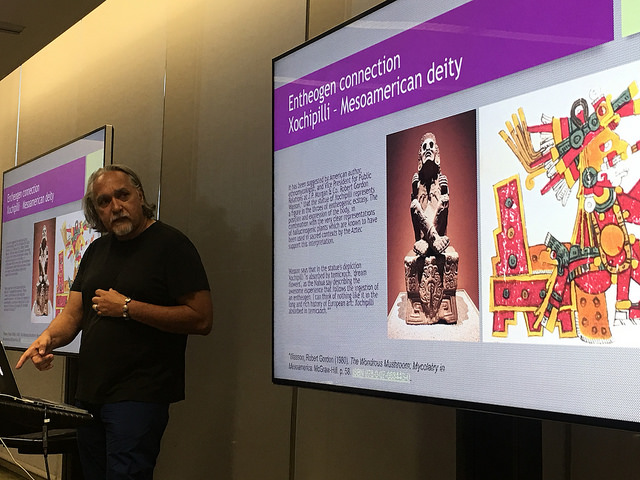 Please join us for our monthly LASER talk following the opening reception for Mark Chavez + Ina Conradi's The Double-Slit Experiment.

Victor Acevedo, whose career spans 40 years, is an artist best known for his digital work involving printmaking, photography and visual music. He is currently exploring the integration of real-time video work flows in his studio production. Acevedo grew up in Los Angeles and attended Art Center College of Design in Pasadena 1979-81. After moving to New York City in 1995, he worked as an adjunct Professor at the School of Visual Arts from 1997 through 2008 in both the BFA and MFA Computer Art Departments. His work has been featured in many (Digital) art history books; most notably “Moving Innovation: A History of Computer Animation” (Tom Sito, MIT Press, 2013); “From Technological to Virtual Art” (Frank Popper, MIT Press 2007); “Art of the Digital Age” (Bruce Wands, Thames and Hudson, 2006) Acevedo Media

Eddy Vajarkitpongse is a creative technologist developing non-traditional audiovisual experiences for brands and artists. He is the CEO and an artist at yaknowlike studios, a full service experiential creative agency based in Los Angeles fusing cognitive research, technology, and art. He also serves as the director of LAVA. Founded in 2003, LAVA is a community of video artists working primarily in the field of immersive experiential video art. yaknowlike studios | LAVA

Agnes Stauber is the Creative Director of Digital Media at the Los Angeles County Museum of Art (LACMA). She is an experienced media producer for museums (Interpretive Media, Educational Videos, Website, Mobile Application, Social Media) and has worked with institutions such as LACMA, the UCLA Fowler Museum, and the J. Paul Getty Museum. Agnes Stauber

Haytham Nawar is an artist, designer, and researcher who currently lives and works in Cairo. He is Assistant Professor and Director of the Graphic Design program, Department of the Arts at the American University in Cairo. He is the founder and director of the Cairotronica, Cairo Electronic, and New Media Arts Festival. Nawar received his Ph.D. from the Planetary Collegium, Center for Advanced Inquiry in Integrative Arts, School of Art and Media - University of Plymouth. He holds a Masters of Advanced Studies ZFH in Spatial Design, Institute of Design & Technology, Zurich University of the Arts, Switzerland and an MFA in New Media and BFA in Printmaking from the Faculty of Fine Arts, Cairo, Egypt. He is a Fulbright alumni. Since 1999, he has participated in several international exhibitions, biennales, and triennials, the latest of which was Venice Biennial in 2015. Nawar won awards and acquisitions nationally and internationally in Algeria, Bosnia and Herzegovina, China, Cyprus, Egypt, France, Greece, Germany, Italy, Japan, Lithuania, Portugal, Kuwait, Spain, South Africa, South Korea, Switzerland, Syria, UAE and the United States.

Ina and Mark have been collaborating on numerous art and new media projects for the last 20 years, most recently awarded by the Hollywood Advanced Imaging Society’s 2018 Lumiere Award for the best 3D Short Animation. Their ongoing project Media Art Nexus (MAN) is supported by the Singapore’s NTU Museum’s Public Art Initiative. Animation industry veteran and founding faculty at NTU School of Art, Design and Media, Mark is based in Singapore and Los Angeles, founder of Giant Monster Pte Ltd. Ina is Associate Professor at the Nanyang Technological University Singapore. They both hold a Master’s of Fine Art from UCLA. Ina and Mark are currently Artists in Residence at the UCLA Art|Sci Center. While here, they have premiered a new collaborative piece 12 States of Zodiac together with Victoria Vesna + Siddharth Ramakrishnan + Marisa Caichiolo for occasion of the Hox Zodiac exhibition at Building Bridges gallery in Santa Monica, CA. Ina Conradi | Giant Monster

LASER (Leonardo Art Science Evening Rendezvous) Talks is Leonardo's international program of evening gatherings that bring artists and scientists together for informal presentations and conversations. LASER Talks were founded in 2008 by Bay Area LASER Chair Piero Scaruffi and are in over 20 cities around the world.