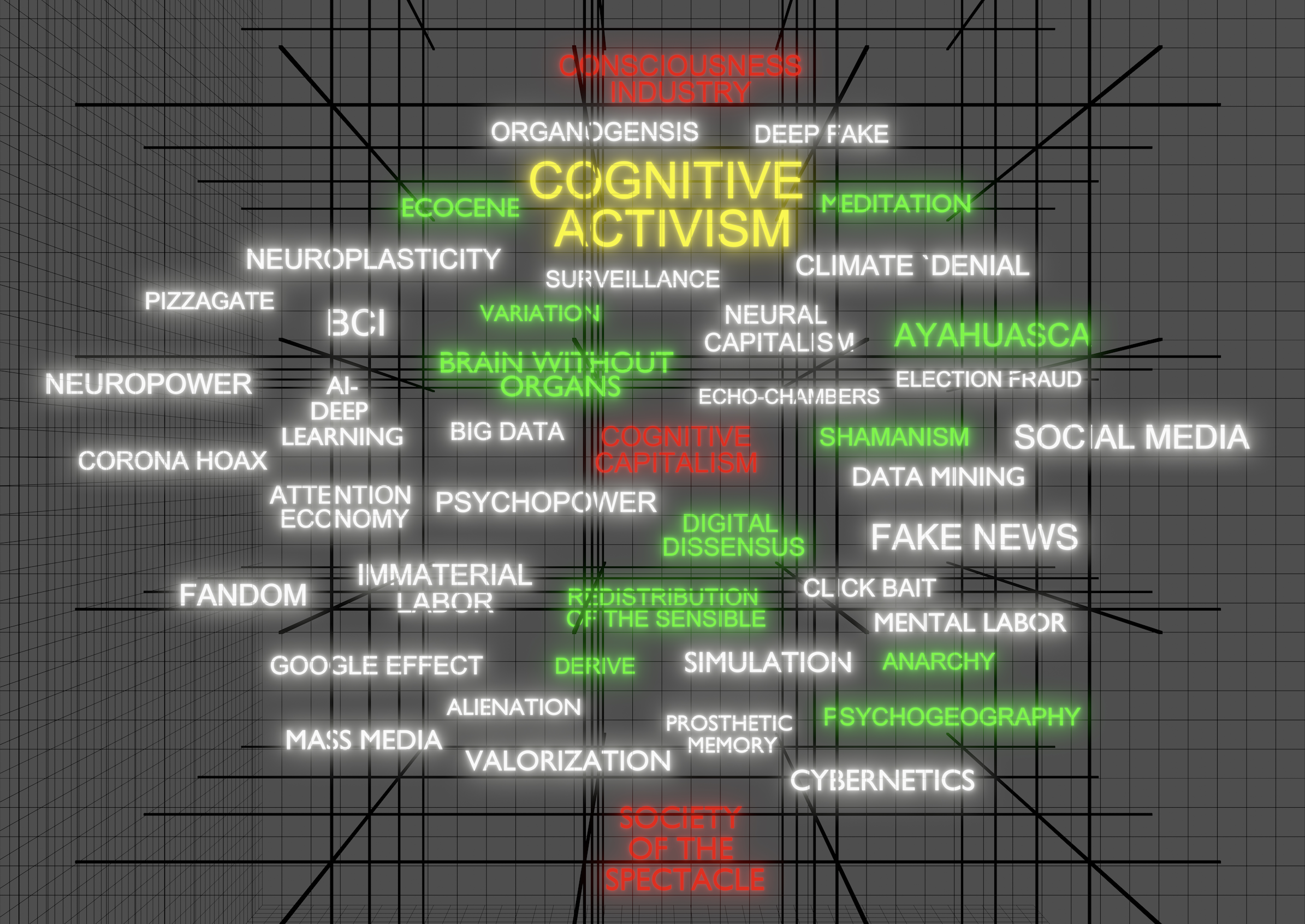 Organized by Warren Neidich in collaboration with UCLA Art Sci center, The Getty Research Center, The Saas-Fee Summer Institute of Art and the Museum of Neon Art.

This conference endeavors to describe the role of art and artists in cognitive capitalism in which
the brain and mind are the new factories of the 21 st century. We are no longer only proletariats
working on assembly lines to create objects but cognitariats or mental labors working on screens
to produce Big Data which is sold to policing, governmental and cooperate entities. This has led
such authors as Byung-Chul Han, in his book Psycho-politics: Neoliberalism and New
Technologies of Power, to understand that in our moment biopower, Foucault’s power over life
as a form of the granular management of life, has transitioned to psychopower or psychopolitics
in which the mental laborers or cognitariats gladly give up their freedoms without direct coercion
to labor incessantly and overtime to interact with digitality. His new term for this is “smart
power”. But we are now on the doorstep of another transition almost or maybe as important as
that which transformed the agricultural/manufacturing economies into knowledge and
information economies. It is referred to as a neural based economy in which the material brain
and its neuroplasticity have become the focus of capitalistic commodification directly and
indirectly. Directly through technologies like brain computer interfaces, nootropics and cortical
implants and indirectly with Big Data, neuroeconomics and neural consumerism. In this neural
economy, psychopower has further transitioned to neural power where the material brain is put
to work. In psychopower and neuropower the body’s importance is reduced and subsumed by the
brain and mind. The brain, as understood here, is not restricted to the bony carapace of the skull
as cognitivists would have us believe but is a situated complex that extends into the socio-
political-cultural-ecological milieu with which it coevolves. Changes in the external milieu are
mirrored in the architectural composition of the brain through a process that Bernard Stiegler,
later in his life, referred to as exosomatic organogenesis, in which technical rather than genetic
evolution is at the core of the liberation and perfection of organ systems, especially the brain.
This brain-model is a diverse, variable, rhizomatic, intensive, becoming entity in constant
transformation. Consciousness is no longer understood as something restricted to and most
elegantly formed in humankind but rather is traced into the deep history of inorganic matter and
shared with plants and animals in non-hierarchical alignments.
This is the starting point for this symposium in which artists, architects, art historians, and
philosophers using their own practices, materials, histories, and apparatuses unveil the mysteries
of this becoming brain model.  In fact, the power of art is its special alliance with the sensory,
perceptual, and cognitive as a source of emancipation, magic, and diversity in contradistinction
to cognitive neuroscientific models of aesthetics in which it becomes a map or model of data
points subject to forms of institutionalization, normalization, and demystification. This is where
the idea cognitive activism becomes evident as a reaction and form of dissensus against these
conservatisms.   Key to this conference is Catherine Malabou’s entreaty that the brain is our
work, and we have the capacity to make our own brains if we have the fortitude to do so. In this
vein we also will engage with Victoria Pitts- Taylor in her book The Brain’s Body understands,
“the plastic, social brain also reveals neurobiology to be political-that is, capable of change and
transformation and open to social structures and their contestation.”