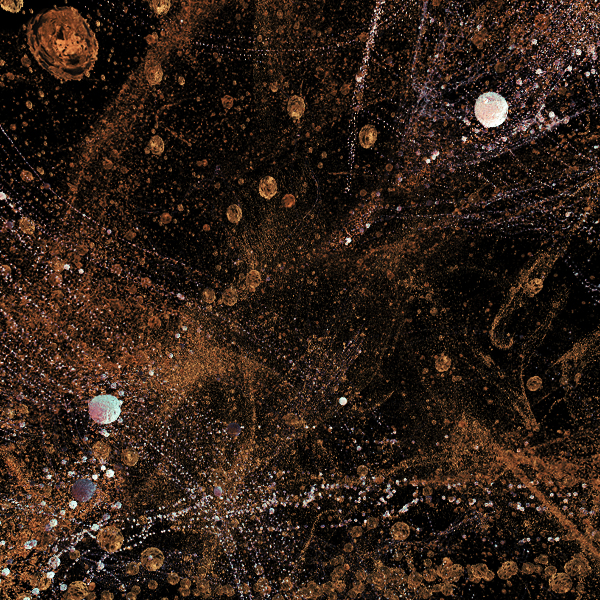 Signal to Noise, a guided meditation journey bringing to life the sensations of meteorites and micro-meteorites falling on all continents and mixing with the anthropogenic dust falling on our planet from many dimensions.
7 Jul 2020 - 2:00pm

Victoria Vesna’s work has long focused on immersing her audiences in installation spaces that are meant to slow down time and take us into other dimensions. This led her to work in close collaborations with musicians, sound artists, nanoscientists, biologists, neuro-scientists and buddhist monks among others. Some examples of work in the past two decades are the NanoMandala, Water Bowls, Blue Morph, Octopus Brain Storming, Bird Song Diamond and most recently the Noise Aquarium. In this new work, together with her collaborators from the UCLA Art Sci collective and Harvestworks, she takes us on a meditative journey to outer space.

Premiering with the support of Harvestworks, this work is meant to be experienced as a guided meditation bringing to life the sensations of meteorites and micro-meteorites falling on all continents and mixing with the anthropogenic dust falling on our planet from many dimensions. Layers of sounds from inner and outer space with animations of dust and data driven by corona deaths are presented with the intent of honoring those who left their bodies without preparation and all who are suffering.

This online version was created as a meditation that is guided by the artist following the extra-terrestrial, terrestrial, and human-made dusts traveling far and wide and creating complexity that is part of an invisible reality. Most go about their daily life without being aware of ever thinking about the extraterrestrial dusts that could be on their kitchen floor, right here on earth. The alien signal is lost in the human noise and the group meditation reclaims our vision of planetary citizenship.

We are created from stardust by nuclear fusion, like our myriad siblings – animals, plants, insects, plankton, bacteria, and viruses, and we all function together in vibratory fields – bottom up just as nature and nanotechnology works. [Alien] Star Dust rains on us every day and this piece brings these particles to our attention and reminds us of our interconnected heritage in the larger cosmos. Dust knows no borders.

We are Star Dust

Caught in the Devil’s bargain

And we’ve got to get ourselves

Back to the Garden

[Alien] Star Dust installation premiered on March 10, 2020, at the Natural History Museum in Vienna as a site-specific immersive art experience — the day before the city and all of Europe and most of the world closed down due to the COVID 19 virus. This online meditation version was created in quarantine and meant for all to experience as a way inside, an escape into the vast space of our minds.

You will be guided by the artist following the extra-terrestrial, terrestrial, and human-made dusts traveling far and wide and creating complexity that is part of an invisible reality. Most of us go about our daily life without being aware of ever thinking about the extraterrestrial dusts that could be on their kitchen floor, right here on earth. The alien signal is lost in the human noise and the group meditation reclaims our vision of planetary citizenship.

[Alien] refers to looking up into outer space for star dust and then turning our gaze back down to earth extending the idea that everything is interconnected, flowing, flying, and mixing around our planet and beyond. From Africa, Saharan sand dust falling on the Alps to the ash from fires in Australia landing in Europe – these dusts are the earthly alien particles that mix and overwhelm the space dust.

Dust storms on our planet travel far and wide on earth and most linked to droughts and are believed to have been exacerbated by deforestation, overgrazing of pastures, and climate change. They carry minute particles of beneficial soil and nutrients as well as potentially harmful bacteria, viruses, and fungal spores. Scientists who thought diseases were mostly transmitted by people or animals now see dust clouds as possible transmitters of influenza, SARS, foot-and-mouth, and are increasingly responsible for respiratory diseases such as the COVID 19.>

The animations show the complexity that emerges from meteors breaking up and falling down, mixing with natural and human-made dust. Layers of audio signals from space mixing with human-made noise and melodies of various cultures envelop the space further amplifying the experience of the dust complexity. Borders, walls, and other human-made restrictions of ‘foreign’ dusts, people, and ideas ultimately will not work as we are all part of a vast interconnected cosmic system.

Rhiannon Catalyst adds to the complex sound tapestry her other-worldly voiceand Geluso brings in a flute and drone machine – all to help the participating mind travelers enter another dimension.

The artist also utilized recordings gathered on the roof of the Natural History Museum – from antennae that act as a receiver of radio signals reflected from the plasma trails of the meteors. GRAVES French Space Surveillance Radar located near the city of Dijon (France) is used as a transmitter. These frequencies are mixed with recordings by NASA including: “dinks and donks” — strange sounds created by friction inside of NASA’s InSight spacecraft’s seismometer (SEIS); Raw Sounds from InSights Seismometer on Mars and captures of humming sounds created by the Sun’s natural vibrations

Last addition to the sound composition was added just before finalizing the project when astrophysicists announced the detection of superfast bursts of radio waves flashing across Earth from deep space in a repeating 16-day pattern. Fast radio bursts (FRBs) have likely happened for billions of years, but humans only discovered them in 2007, and have detected only a few dozen of them until recently. This repeating pattern, however, suggests that something else is going on, that there’s some sort of natural machine in the universe for pumping regular shrieks of radio energy across space. [8]

It is important we listen and decode these messages from space.

PAST INTERVIEWS AND PRESS COVERAGE

Alien Star Dust at the Natural History Museum in Vienna